In my quest to complete the Munros, I have this year wild camped, stayed in bunkhouses and hostels and for the first time a bothy. I like my home comforts so it was a new experience for me to stay at somewhere so basic. Bothies are maintained, although not owned, by the Mountain Bothies Association They are basically stone shelters but are wind and watertight and usually with windows and fireplaces. There is no charge for using them but a donation is gratefully accepted by the Association. At the Tarf Hotel Bothy, so named as it is regarded by most people as a five star bothy, there are sleeping platforms but mats and sleeping bags are essential. Bothies are often in remote glens in lovely settings with a burn or river nearby for water.

Glasgow Ramblers kindly arranged to include a trip to the bothy in their programme to enable me to climb the two very remote hills of Carn an Fhidhleir and An Sgarsoch. Six of us went on the weekend with Jim R leading the expedition. We drove to Blair Atholl and left the cars at the car park in Glen Tilt. The Atholl Estate will not allow the public to use their private road so we faced an eight mile hike along the road to Forest Lodge but Jim managed to arrange a lift for us as he had a vision of us not reaching the bothy until it was dark. We are eternally grateful for the drive in which saved about three hours? walking. From Forest Lodge, we climbed the steep path towards Carn a?Chlamain carrying very heavy packs with our food, sleeping kit, dry clothes, cooking equipment, etc for the two nights at the bothy. I carried a thermarest, a lot more comfortable on a hard floor than a sleeping mat and well worth the extra weight. At the col, some went on to bag Chlamain but I walked over the pass on rough ground and finally descended to the Tarf Water and along to the Tarf Hotel Bothy. The bothy has four good rooms and some sleeping platforms. The RME have been refurbishing the bothy and I read about their visits in the bothy guest book. When the others arrived from their Munro bagging, we set to work making dinner. Eileen had four stoves going and we had a gourmet meal, completely unexpected in such primitive conditions. Jim W supplied the wine and Eileen the brandy tots.

The next day we tackled the hills which were relatively easy taking around eight hours including leisurely stops. There were great views over to the Cairngorms. We did have to cross the Tarf Water so once again, the rafting sandals were invaluable. On the hills, we met other walkers coming from Whitebridge in the Cairngorms which is a big day including a bicycle ride from Linn O?Dee. I think the option with the stay at the bothy was the best as it gave us a taste of staying at a bothy and also a much shorter walking day to bag the Munros. On the walk, Eileen collected wood as she was determined we should have a fire in the evening. The wood was sticking out of the top of her rucksack and resembled deer antlers! 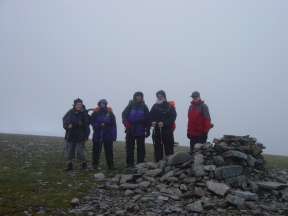 Returning to the bothy we had another gourmet meal prepared by Carol and carried in by Jim R to the bothy with more wine and brandy! It was cosy in the bothy in front of the fire and we forgot the outside world with no mobile ?phone reception and surrounded by remote glens. Glasgow seemed a million miles away.

The next day we packed up and walked the long way back to Blair Atholl but this time we walked the eight miles on the road taking over six hours from the bothy to the car park still with fairly heavy packs. Three brave souls left earlier and bagged Beinn Dearg on the way out! Although I enjoyed the bothy experience, I don?t think I would want to make a habit of it. A big thank you to Jim R for arranging the weekend as it would have been very difficult for me to bag these two Munros otherwise.

E mail me at helenrose52@hotmail.com with your news and views

Thanks to Lesley Williams for the photos