Glasgow Walk: Maryhill, The Venice of the North by Ian R. Mitchell

Maryhill, like Venice, owes its existence to canals. It is said of Glasgow that the city made the Clyde and the Clyde made the city, but in contradistinction to this, it was the Forth and Clyde Canal, and its Glasgow branch to Port Dundas, that made the burgh of Maryhill. The canal snaked through the area from the 1790s and became the artery of Scotland’s Industrial Revolution, carrying raw materials inwards from, and manufactured goods outwards to, the whole world.

Industry grew alongside the canal in Maryhill, benefiting from the cheap associated transport costs; but once more in contrast to Glasgow – where most industrial enterprises were on a massive scale – Maryhill’s industries were small scale, restricted by the lack of available land around the canal, and they were also extremely varied. Govan was ships, Springburn locomotives and Possil iron, but Maryhill had a large variety of industries; textiles, brewing, glassworks, chemical works, paper mills and many more, which gave rise to one of Glasgow’s most glorious and little-known art works.

Maryhill grew over 150 years from scattered settlements to a population which peaked at about 40,000 after World War Two. Since then it has lost all its industry and a good chunk of its population, which has now stabilised at about 25,000. But, despite plans over the years to infill the waterway, Maryhill has not lost its canal, which was restored as a Millenium Project and is now a flourishing recreational and wildlife facility. Nor has it lost much of its fine and fascinating built environment, unsuspected by those who drive up and down the Maryhill Road without stopping. To experience this, as always, walking is best, and there follows an amble round central Maryhill, to which space confines us.

1. Take the train to Maryhill Station and walk south down Maryhill Road till you reach the former Kelvin Dock. This now landscaped area was formerly Swann’s boat building and repair yard where were constructed canal barges and Clyde Puffers, from the 1850s till its closure in the early 1960s. During WWII landing craft for the D-Day invasions of Normandy were built at the dock. The Glasgow artist Joan Eardley painted camouflage on these. Cross the lock gates to gain the canal walkway, the former towpath for the bargees.

2. Make a right turn to quickly reach the Kelvin Aqueduct, a wonder of industrial engineering and well worthy of its A-Listing as an Ancient Historical Monument. The aqueduct strides proudly across the River Kelvin which runs beneath its four grand arches. Designed by the engineer Robert Whitworth, and built between 1787 and 1790 it cost £8,500 almost bankrupting the canal company, but completing the east-west waterway link. Retrace your steps and follow the canal southwards, past some delightful new “Amsterdam” (well, it is a canal) style social housing, then cross over and above the Maryhill Road by a smaller aqueduct.

3. We are now in the former heart of industrial Maryhill, though little of this remains. One factory which still stands is the brick building, being renovated, which soon appears on the right. This was Clarkson’s Engine Works, where small and medium-size steam engines were made for the ships and factories of Canal Burgh. Further on, at Stockingfield Junction, the Forth and Clyde canal winds its way to Falkirk and further; the block of new white flats you see that-aways was built on the site of the former Milanda Bakery. We continue however down the Glasgow branch of the canal. On your right now are some warehouses and the ground of Maryhill Juniors FC. Formerly here many industries were located; a brewery, a textile works and most notably,the Maryhill Iron Works.

The Forth and Clyde Canal

4. In summer this part of the canal is awash with blue and purple orchids on the bank, yellow irises at the canal edge and white water lilies on the water itself; across the canal lies some wild land, where it is possible to see foxes, deer, and even very occasionally, a badger. Bird life exhibits to us heron, coot, grebe, goosander and more. Whaur’s Yer Canal du Midi, Noo? Just before Ruchill Street, and the underpass below it, on the left is a brick building which some might recall as the Bryant and May match factory, closed in the 1980s like much of the area’s industry,and now offices and workspaces. Under and beyond the underpass lies the stunning collection of Mondrian flats, created in the 2000s, on what was the site of largest industrial undertaking in Maryhill, Maclellan’s Rubber Works; this factory closed only 15 years ago. 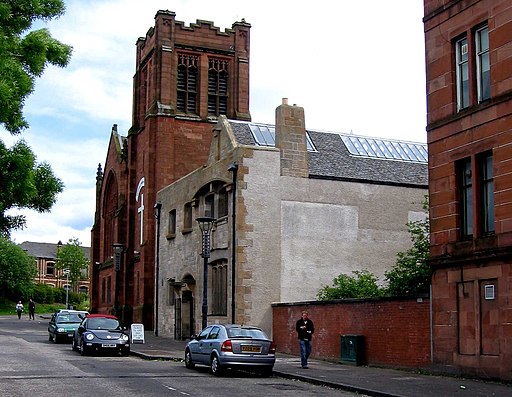 5. Step back a hundred yards or so now, for we are leaving the canal, and heading down Ruchill Street towards Maryhill Road. On Ruchill street is located Ruchill Parish Church, a fairly undistinguished building, but next door is a real gem, Rennie Mackintosh’s Ruchill Church Halls, built in 1899 in his Art Nouveau/Scottish vernacular fusion, with a turreted caretaker’s house in the courtyard. Naturally A-Listed, this is still a functioning religious building with many associated social activities, and is almost intact inside from its construction. Sometimes the hall is open and visitors are welcome. On one of my visits I was suggesting to the caretaker that, given the value of the contents, security arrangements were a bit lax. The response;”Aye then son, if anythin goes missin, we’ll know it was you.”
www.ruchillparish.org.uk

6. Moving back north up Maryhill Road, opposite the fairly hideous Tesco superstore stands Frampton’s Night Club, formerly the Maryhill Trades Union Centre but originally the Soldiers’ Home, a social club for the soldiers at Maryhill Barracks. Here those on leave could stay with their families. A charming wee toy of a building with battlements and other military features. Evenings here are reputed to be lively affairs.

A little further on up the road, but across on the other(left)side of the street, is the wall of the former Maryhill Barracks, closed in the 1960s and demolished. At the entrance marked by iron stanchions embellished with the initials VR, is located the former barracks gatehouse. Local legend has it that Rudolf Hess was briefly detailed here on his ill-fated peace mission in 1941.Behind the walls lies the Wyndford housing estate, which won a Saltire Award when it was constructed, and was recently completely renovated. It is an excellent, well-maintained estate.

7. Yet further north we come to Gairbraid Avenue, back along which in days gone by lay Gairbraid House, where dwelt Mary Hill the wife of the estate owner, who gave her name to the town. Now on the corner stands the refurbished and reopened B-Listed Maryhill Burgh Halls by architect Duncan MacNaughtan, in French Renaissance Style. The halls date from 1878 and served the burgh till annexation by Glasgow in 1891. Their crowning glory are a set of twenty stained glass panels by Stephen Adam depicting the industries of the burgh in the High Victorian period. Restored and replaced in the halls (in rotations of 10)the panels are one of the finest works of art of the gilded age of Glasgow’s cultural life. They can be viewed on the website of the halls, but for their full impact, go see them. The halls have a cafe and by this time you may feel in need of refreshment.
www.maryhillburghhalls.org.uk

8. Before you pass under the short aqueduct over Maryhill Road that you walked across a while previously, notice on the right Maryhill Library, one of six designed for Glasgow in 1905 by the architect J.R. Rhind, with its sculpted figures of a pedagogic matriarch and attendant children high on the frontage. The entire collection of Rhind’s libraries are A-Listed. Once under the aqueduct you pull up the brae to find yourself on the east side of the canal, with the White Hoose as it is locally known, soon appearing on your left beside a berthage for canal craft. This building is probably the oldest in Maryhill and dates from the time of the canal construction itself, and was at once a hostelry, a stables and a hotel for passengers on the canal and for the bargemen and their beasts. It was open 24 hours a day, as barges, called “hoolets” (owlets) carried goods and passengers on the canal at all times. Sadly dilapidated for many years, after various previous uses, it is now a cycle repair and hire base for trips on the canal towpath and beyond. The White House lies on the Maryhill locks complex at Kelvin Dock, where our walk began, and from it is a short tramp further up Maryhill Road and back to Maryhill Station. Stained glass wonders, a Mackintosh masterpiece, Ancient Historical Monuments and a canal walk to die for, if that wasn’t your view of Maryhill, it will be after this walk.

A Circular Walk from Kelvingrove Park by Ian R. Mitchell

On The Cowboy Trail- Book Preview May, 2012
from Encounters in the US Mountain West; A Sinner amongst the Latter Day Saints, by Ian R. Mitchell – to be published by NWP Publishing in September 2012

Ian can be contacted for information regarding lectures,
broadcasts and commissions for articles by email:  gleniffer21@btinternet.com

Book Launch: New Shoots Old Roots (2)
Mary Irvine: What Did You Do In Lockdown 2020?