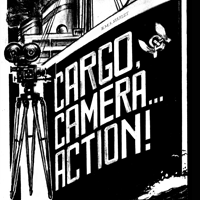 A Cinematic Spectacular on the River Clyde – Saturday 26th July, 2014

Glasgow Film, the umbrella organisation which comprises both Glasgow Film Festival and Glasgow Film Theatre, announces Cargo, Camera… Action!, an outdoor celebration of moving image and Glasgow’s history, as part of the Cultural Programme for the Glasgow 2014 Commonwealth Games.

On Saturday 26 July, 2014, Glasgow Film will take  over the River Clyde – the walkways, the bridges, the banks and the river itself. Cargo, Camera… Action! is Glasgow Film’s contribution to Festival 2014: a day-long cinematic spectacular on the water, created with artists, performers and filmmakers who embody the exciting creative ethos that underpins Glasgow’s grassroots arts scenes.

The various artists involved with Cargo, Camera, Action! have been asked to look through a cinematic lens at the city’s history of shipbuilding and shipping, and at the history of sport throughout the city. During the day, Glasgow-based arts collective 85A create a mocked-up film set, complete with runners, producers and a self- important director, in the amphitheatre space at Custom House Quay; at its centre a huge kinetic sculpture of an ocean liner, which will host hourly theatrical concerts between 2.30 and 8.30 p.m.. At dusk, the river itself gets ready for its close-up, with moving images projected dramatically onto a fountain of water rising from the Clyde.

After dark, the promenade along Custom House Quay becomes a late-night outdoor cinematic and musical playground, brought to life with projected films, lighting installations, live music and performance tapping in to the city’s history and calling out to the wider sporting activity going on around Glasgow during the Commonwealth Games. A series of films and set pieces will lead audiences along the Clyde, discovering more about the history of the river and the city. Artists Minty Donald and Nick Millar have created a stunning under-water film, with a custom-made screen, submerged just below the surface of the Clyde, onto which a film of five choreographed synchronised swimmers will be projected; while theatre-maker Eilidh MacAskill puts on a special version of her critically acclaimed performance project Bicycle Boom, which celebrates the effect that the arrival of the bicycle had on Victorian women’s emancipation. Glasgow Film has also commissioned brand new cinematic works from two of the city’s leading artists: photographer and filmmaker Chris Leslie documents Govan’s proud shipbuilding heritage in a short multimedia film focusing around the Fairfield yard, interviewing past and present workers; weaving in timelapse photography and archive footage; and award-winning artist filmmaker Torsten Lauschmann examines the origins of local children’s playground games and songs, tracing an evolution from informal play to formal sporting activity.

Throughout the day and night, a relaxed open-air café space beside the amphitheatre will encourage city residents and visitors to the games to sit down and enjoy the river itself; its history, its place at the centre of Glasgow’s development, and its views.

‘Glasgow Film is delighted to be part of Festival 2014, and grateful for the opportunity to show off both a beautiful part of the city, and some of its most exciting film artists. Cargo, Camera… Action! aims to connect with new audiences, including international visitors to the Games, and showcase areas of the city – significant, unexpected and underused locations around the River Clyde – that can otherwise pass tourists, or even locals, by. Glasgow Film has chosen to work with artists who best represent the different types of film work being created in Scotland today, bringing them to a wider international audience at a time when the eyes of the world are on Glasgow.’